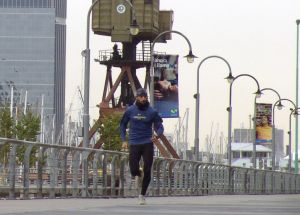 I used to hate running. But I tried it this year and have become convinced that running is the gateway drug of the fitness world. You can walk forever without feeling the need to do anything more. I find it exceptionally difficult to make a concentrated effort of running and not have visions of marathons, triathlons, or being in South Africa playing for a World Cup team.

Back in January, I came up with this crazy idea to set out to run a 5K. I say it’s a crazy idea simply because I was somewhere around 100 pounds overweight. Simply the thought of running anywhere was absolutely unreal. But I have a handful of friends who run marathons and I figure if they can run 26.2 miles, I must be able to run 3.1 nonstop.

I decided to use the Couch To 5K Running Plan instead of going out there and winging it. I figured being on a plan is the best way to start anything. So out I went. The first day told me to walk 5 minutes, then run 1 minute, then walk 1 1/2, then repeat…for a total of 9 1-minute running intervals.

I knew that was too much for me. So I found a slightly longer plan that started easier. I decided to use that for a few weeks to try to get me ready for C25K Day 1! The first day I walked 15 minutes. Simple. Then on Day 2, I walked a few minutes, ran 1, and walked a few minutes more. That minute of running about near killed me. Then I looked at the plan again and realized I was actually supposed to repeat the 1 minute run. So I went out and did it again the next day. The next day of walking was a welcome change of pace.

“Do you really want to die?”
I decided that the running was going to be the death of me at that point, so I changed my plan of attack. Throughout the months of January and February, every time the plan told me to run, I would actually walk at a slightly “peppier” pace than I had been walking. Even so, I continued fighting through leg cramps, lower back pain, upper back pain, chest pain (nowhere near as fun as it sounds…), breathing troubles, lung pain, knee pain, ankle pain, foot pain, a pesky heel spur, arm pain (I still can’t figure that one out, but it happened more than once). I also “ran” in wind gusting over 40mph, freezing winds, rain, and freezing rain.

Lose the battle, win the war
There were plenty of times that I wanted to quit. There were days when I’d set out to run and get there and start, and the pain would just get the better of me. During these times, I would tell myself that it’s better to lose the battle to win the war. I stopped, felt like a failure, and decided I would just live to fight another day. And fight I did.

Running for real
Beginning in March, I decided to start the C25K plan over again, but this time actually jogging the intervals. I don’t know how fast I went, but I do know when I started, I was actually “running” slower than my walking pace. Seriously. I could walk 1/4 mile in 5 minutes and run the same distance in 5:15. But I never let that dissuade me. Like Forrest Gump, I just ran. March was a great month as I saw a whole lot of progress. I ran nearly every day. On days I didn’t run, I’d just go out and walk.

I finally fell in love with running in March.

I finally came to grips with the fact that, though I don’t look like it, I am a runner. My mom bought me sweet running shoes over Spring Break. I also downloaded the RunKeeper Pro App for my iPhone. That is without question my favorite iPhone app. The web interface is amazing. It appeals to the math nerd side of me. Big time. It maps my route, it graphs my progress, it determines my speed, it posts to Facebook and Twitter. It even allows me to distinguish what I’m doing each day. If I’m running I choose that, I can also tell it that I’m Cycling, Mountain Biking, Walking, Hiking, Downhill Skiing, Cross-Country Skiing, Snowboarding, Skating, Wheelchairing, Rowing, working out with an Elliptical, or even Swimming (really?). It would let me use a treadmill and input my info as well.

Moving Forward
As the month continued, I just kept running and running. On the Tuesday of Spring Break (March 16th), I ran in my new running shoes for the first time. I ran 90 seconds, walked 90 seconds, ran 3 minutes, walked 3 minutes, and repeated for a total of 9 minutes of running. I set a goal to run 1 mile before my band went to UIL on March 31st. To get there, I started accelerating the program a bit and pushing myself hard. I also worked my band hard. I remember one day we had a rehearsal until 7. I stayed at school an hour waiting for one kid to get picked up, then I went home. A friend texted me to go run with her, so I changed clothes and went out at 9pm (on a school night, mind you) and ran 3 six-minute intervals. Then I woke up the next morning and ran 10-minutes nonstop at 6am. Two days later, I woke up early Sunday morning and went out and ran a mile before church.

The amazing feeling of accomplishment
After three months of working hard on pushing myself both physically and psychologically, the realization that I could now jog a mile was pretty amazing. I mostly walked in a 5K on May 5th and I was able to complete the C25K plan by running my third 30-minute run on May 20th (a tad longer than the prescribed 9 weeks). Over the next three months, I have continued the running habit and it has simply become second-nature for me. Now I am setting my eyes so much higher…

6 thoughts on “My (Totally Unexpected) Love Affair With Running”