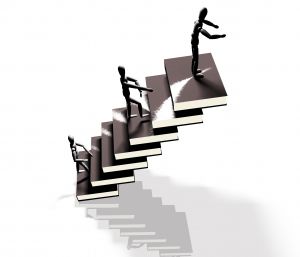 Since I have decided this new year to slowly end my hatred of running that I have harbored for the past decade or so, I’m reading more about it. I am inspired to find there are a handful of pretty good health and fitness blogs that my school hasn’t blocked on the network yet too! My conference period can now be spent walking, reading, or actually doing productive things for my band!

Today I have been catching up on some of the Twitter links I’ve seen and came across 13 Most Inspirational YouTube Videos of All-Time that Angela Maiers had sent out a few days back. I was really impressed by this video.

I was so impressed that I decided to dig in and see what more I could find from him. I came across an interview he did following the release of I Am Legend (Will Smith Walks Alone in I Am Legend). Below are three excerpts from the interview:

Smith on the discipline of losing twenty pounds for the role
“For me, the important part of that, and what we determined from our research, is that eating becomes something you do because you have to. There is no pleasure, there is no desire to eat, you just know your brain won’t function if you don’t. So losing weight and then the working out being part of the regimen you have to do – but for me I have a much easier time losing weight than putting weight on. Ali was fifty times harder trying to put weight on than to drop. If you run thirty miles a week and do five miles six days a week, your body will look like whatever you want it to look like.”

Will Smith on whether he has a positive attitude towards life
“Yes, absolutely. I feel very, very confident that the keys to life for me are reading and running. The idea that there are millions and billions of people who have lived before us, and they had problems and they solved them and they wrote it in a book somewhere – there is no new problem that we can have that we have to figure out by ourselves. There’s no relationship issue, there is no issue with your parents or your brother or your government, there is no issue we can have that somebody didn’t already write a thousand years ago in a book. So, for me, that concept of reading is bittersweet because you know it’s in a book somewhere but you’ve got to find the right one that is going to give you the proper information. I said reading and running and the running aspect is how can you connect with your weakness. When you get on the treadmill you deprive yourself of oxygen. What kind of person you are will come out very, very quickly. You’re either the type of person who will say you’re going to run three miles or you stop the treadmill at 2.94 and you hit it and you call 2.94 3 miles, or you get off after a mile, or you’re the type of person that runs hard through the finish line and when you get to 3.0 you realize, ‘God, I could really do 5,’ and you go ahead and do two more. And that little person talks to you and says, ‘Man, do you feel our knee? We should stop. I feel we should stop ourselves right now. This is not healthy anymore.’ When you learn to get command over that person on that treadmill, you learn to get command over that person in your life. That’s the same person that tells you, ‘Man, that girl’s got some big breasts. Listen, we don’t have to do nothing, let’s just go the hotel room together.’ That’s the same person. Getting command of that person has been really important.”

On where his confidence originates from
“There is a very central idea in my life. My grandmother just thought I was the greatest. She always had us always playing piano and having us do recitations at church and all of that. She always kept us in the shows at church and there was a look of pride that my grandmother have in her eyes that became the fuel that I need in life. I need my woman and daughter and mother and women in general to look at me with that look that my grandmother had. I was about 15 years old when my first girlfriend cheated on me. It so destroyed my concept of cause and effect, that you can be good and good stuff happens, and when you’re bad, bad stuff happens. I processed why she cheated on me was I wasn’t good enough, and I made a decision in my bed that I would never not be good enough again. That was the last time in my life that I would not be good enough. In that bizarre hurt 15-year-old mind then nobody would hurt me or cheat on me if I’m good enough. I may have gone a little overboard on it but every single day Jada has to have that look. I can’t function if she doesn’t have that look in her eyes. That means with the movies, as a husband, as a father, everything I do in life I educate myself to the place that I can contend with the best on Earth and that’s the only way to keep my woman from leaving me.”

Be inspired, stick with your goals, and don’t end 2010 the same way you started it!