Skip to content
You are here
Home > Posts tagged "Tide"

Think back 5 years. March 2004. It feels like an eternity ago! For me, that was when I really hit the wall. That was when my head director told me that my contract would not be renewed. I resigned in lieu of nonrenewal. I spent the remainder of the semester learning like crazy. In fact, that is the experience that eventually formed the inspiration to begin this blog (read more here). But that's really not the point of this email, the thought just struck me and I realized how quickly time passes and how much I've grown since then. 5 years ago, there was no MySpace (until August 2003), no Twitter, no Facebook. Nada. Blogs were beginning to take off 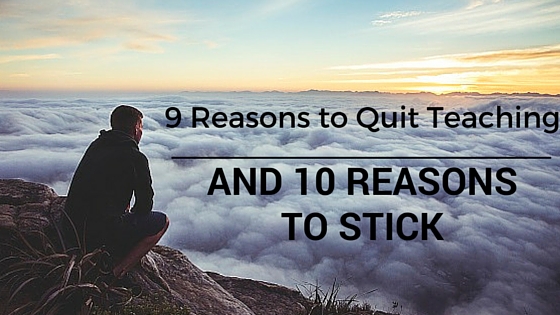 Life as a teacher can be awfully challenging. While the challenges changeÂ as we gain experience, there are always new ones. It can be an awfully lonely time for many teachers. This article looks at 9 reasons to quit teaching and also raises 10 reasons to stick with teaching. Think of the many reasons you have to quit teaching Bad students Bad administrators Bad curriculum Too much paperwork Too much negativity Too much responsibility Not enough time Not enough credit Not enough PAY Face it, you are not as good of a teacher as you could be. You're not living up to your potential. Nobody is. Where am I? Seth Godin says that you are in The Dip (What's The Dip?). This is that place