Skip to content
You are here
Home > Stress Reduction >
1 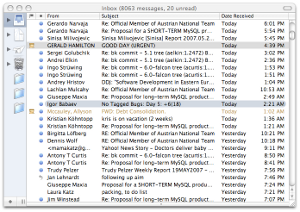 Email Inbox
Something that many teachers can’t seem to figure out is how to archive their old emails. Instead, they just leave them all in the inbox. I was at an inservice and the presenter apologized to one of the other teachers because she had been gone for a few days and overlooked the teacher’s email because it got lost in the shuffle. She didn’t get around to it until two weeks later. That’s just plain inexcusable! So how do we avoid the scene in the picture above?

Well, archiving is the key. Create folders to keep all of the old emails that you might need later. I have:

Any time I get finished with an email, it either gets deleted or goes into one of the archive folders. It’s so simple. Just drag the email over to the folder and it’s done. I know some who recommend getting everything out of the inbox, but I find that if it’s not in the inbox, I won’t mess with it. So I leave pending things in the inbox. Another important thing I do is sort the emails with the oldest on top. That keeps the above scenario from happening.

Desktop
The next step is to make sure the desktop remains clear. I do this by storing all of my files on a network drive. I may occasionally use the desktop for temporary storage, but once something has been done, it is either deleted or filed away. I archive old files so I can go back and look at them. At the end of each school year, I put everything from the current year into a big Zip file. So I have 04-05, 05-06, and 06-07 files that I can go dig through if I need to find something I did last year. I also sort my files based on context (Budget, Band Stuff, Personal, Videos, etc.). Next week, we will look at getting rid of the extra paperwork…