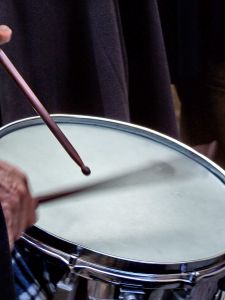 This year, I’m going through some history and exploring The Evolution of Marching via YouTube. I’m taking you along for the journey as well. Now we come to the most modern marching shows available. Props continue to be more thoroughly integrated into the show, and the color guard continues to be used to add color and visual contrast, as well as actual actors in a story. Electronics are now integrated into the DCI shows as well, and we see the drum majors of Phantom Regiment’s 2008 production being used as characters throughout the entire performance. Many corps are now using a pre-show, which adds to the storyline as the ensemble is entering the field and setting up/warming up. Essentially, the entire time from field entry to field exit is now one grand production.