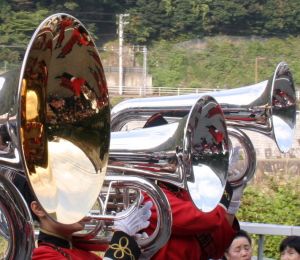 As the school year winds down, band directors invariably begin turning their minds towards the upcoming marching season. This year, I have a 7th grade percussionist who knows a ton of trivia about Drum Corps International. His father used to march and has taught across the country, so he comes to middle school with a much better background of the history of drumming than most students.

Over the last few weeks, I’ve been having some conversations with him and I began to realize that he doesn’t know a lot about the old history of marching, and I don’t know a lot about recent marching history. So I thought I’d go look through the YouTube archives and watch parts of as many of the DCI world championship performances as I could find. So I figured I’d share them with you as well. Originally, I had all of the videos on one page, but it ended up being too big, so I have since decided to turn this into a series of articles and break things down into smaller segments. Check them out:

In the mean time, be sure to subscribe to the DCI Field Pass Podcast (RSS) to receive the latest updates on DCI events throughout the 2010 season.