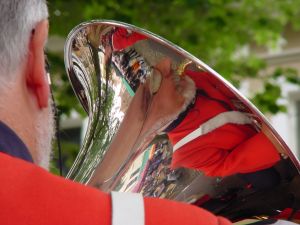 This year, I’m going through some history and exploring The Evolution of Marching via YouTube. I’m taking you along for the journey as well. So far, we’ve seen the first 11 years of DCI. In 1983, the Garfield Cadets began their three-year of DCI dominance with some of the most innovative marching drill ever seen. The Blue Devils won in 1986, and the Cadets were back on top in 1987.

1986 – Blue Devils
Embedding disabled, click here for the video. However, since every other year was dominated by the Garfield Cadets, here is their 1986 video.