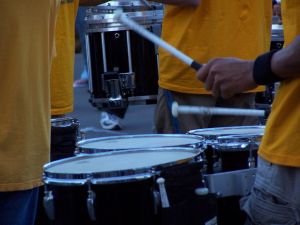 This year, I’m going through some history and exploring The Evolution of Marching via YouTube. I’m taking you along for the journey as well. As we moved into the new millennium, the color guard moved further from the hornline and drumline as far as uniforms, but began to interact much more with the individual members. Where the early 90s has included an occasional soloist interacting with the guard, now large groups of the hornline were doing full out ballet moves and poses throughout the shows.

Though it had been before, the marching show is now even more dance- and entertainment-oriented and becomes more of a full out production rather than just musical entertainment.

While the Blue Devils were performing at their very first show of the 1999 season, the lights in the stadium and the entire city of Concord, CA went out. The Blue Devils continued marching. This video was posted on YouTube less than a week ago.