Skip to content
You are here
Home > Blogging & Technology >
33 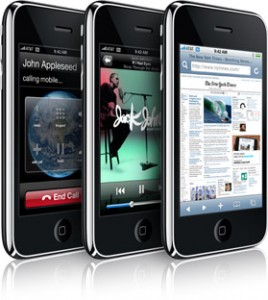 For an updated list of iPhone apps I actually use in band class after over  year of use, check out 20 Ways I Really Use My iPhone To Teach Band Class

I haven’t gotten a new cell phone in the last two years, so I am excited about this opportunity to upgrade. My decision to buy an iPhone was anything but spur-of-the-moment. In fact, I have been planning on getting one for just about 5 months. I was going to get it shortly after my band earned Sweepstakes at the UIL Concert & Sight Reading contest back in April. But I heard rumors of a new version of iPhone coming out then, so I waited.

I have been eagerly waiting for today since Steve Jobs announced iPhone 3G’s July 11th debut back in June. Since then, I have been able to plan lots of great classroom uses for my iPhone. I downloaded iTunes 7.7 last night and began to explore the App store. I found some real gems in there that will come in extremely helpful for my job as a band director.

There seem to be some worldwide problems with activating the things, but I’m learning patience and it should eventually be worth the excitement. So while I’m sitting here this morning looking at my brand new iPhone 3G, I thought I’d list some of the ways that I will use my iPhone in the classroom.