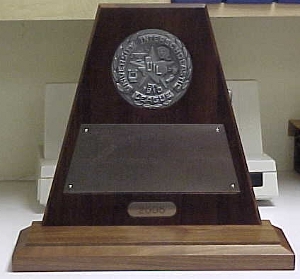 How UIL works
I will be taking them to perform a concert program of three pieces that we’ve been working on since February. Following the concert, we go to the sight reading contest. In that, each band is allotted a certain amount of time to look at a brand new piece of music. As a director, I can spend the first part (four minutes for my band) talking them through it and pointing out key changes, accidentals, tempo changes, repeats, etc. In the final three minutes, I can actually sing or count rhythms or do whatever I feel like I need to do to get them to where they can play the music well. For both portions of the contest, we play for panesl of three judges who will assign the band a rating of I (Superior), II (Excellent), III (Average), IV (Below Average), or V (Poor). Essentially, the band’s rating is the middle of the three ratings. If two judges agree on a rating, that is what they get. The actual chart looks like this:

If the judges on both of the panels (Concert & Sight Reading) award the band a First Division Superior rating, the band earns the Sweepstakes Trophy.

UIL requirements
Since my school is classified as a CCC Middle School. The varsity band is required to play a minimum of two grade 2 pieces and a march of the director’s choosing as well as Level 3 sight reading. My band is required to play two grade 1 pieces and a march and performs the Level 1 sightreading piece. Both of the bands are going beyond the minimum requirement for their concert programs.

Our UIL band program
Our Symphonic Band is playing:

Our Concert Band is playing:

How I plan to get sweepstakes
With all of that background, here are 10 things that I have done or will plan on doing the rest of this week as I prepare my band to go to UIL this Thursday.

Different focus in full band rehearsals vs. classes
This week, I am really going to do two totally different things in the band classes and before school rehearsals. My classes are divided up into brass, woodwind, and percussion. I will address each of these classes differently this week. When I have the full band together, the focus is going to be more on band sound than anything else.

Brass class focus
I want to split the class up into low brass and high brass, with me taking one section and my head director taking the other section. I want to focus on getting more sound from low brass, and I want to have a whole lot less wrong notes from the trumpets and horns. Using my wrong note hunt that I’m about to do, I will know exactly where I am going to attack things beginning tomorrow.

Woodwind class focus
I think I’ll keep the whole woodwind section together. I need my saxophones andf flutes to play softer (ALWAYS), and I need my bass clarinets and second clarinets to get better tone. Additionally, I must eliminate wrong notes.

Eliminating wrong notes
How will I eliminate wrong notes? On Monday, I will isolate every highlighted section from my score and be sure everyone knows the right notes. On Tuesday, any more wrong notes will be removed by having kids not play those sections. Hopefully they will all be gone by Wednesday, but if there are any more, I’ll do more cutting.

Anyway, enough writing, time to get to work!

8 Comments on Last Minute UIL Concert & Sight Reading Preparations: 10 Things I Am Doing To Try To Get Sweepstakes