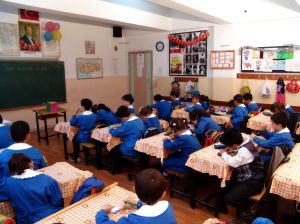 I have a rough 5th grade class. most of them are hol overs and have behavioral problmes. There is too much attitudes(girls) there is no self control and self dicipline (two boys) what should I do. I’ve called parentsand it works for two days. I,ve take nots and had parents visit the school and no cigar. Give me advice. I see myslef sometimes not teaching for a good 10 minutes which is horrible. Most of the time i have to bribe them with candy oir snacks. But how far does that take me? I need a respons asap. thanx.

I have felt this pain before! My response was:

Lemme start out by encouraging you to hang in there! I am going to answer this basically as to how I turned my classes around after spring break during my second year.

A change in roles
The first thing that I would recommend is to completely reevaluate your role in the classroom.You are no longer simply the teacher. You are the classroom dictator. You need to be in control of everything that happens in the classroom. Both the good and the bad. If a pencil is thrown across the room, it is YOUR FAULT. If a kid turns in her homework on time, it is your fault! If you don’t take the responsibility for the actions, you won’t begin to fix stuff very quickly.

A change in rules
You have rules established in your classroom, but they are not followed. Get rid of those rules. They are either too specific, or they are unenforced. Try these two rules out:

You have rules established in your classroom, but they are not followed. Get rid of those rules. They are either too specific, or they are unenforced.From there, clarify the consequences. You screw up, you will sign a notebook. You sign the notebook, mommy gets a call. You screw up again, mommy gets called in the middle of class and the student has to explain that he has detention after school that day. I would avoid having them explain the situation because they tend to get emotional and blame the teacher for their misbehavior. I often will confirm with the parent that the student is a great person, but they made a choice to misbehave today and it is unfair to the other students when (s)he misbehaves and keeps them from learning. Document the phone calls in some sort of notebook or notepad.

A change in rewards
I have known teachers who use candy as rewards and others who don’t. I have done both, actually. I think right now, you are in the position when you need to change what you’re doing! So I would bail on the candy. Not entirely, but for a little while.

Set up some sort of contingency plan that every time a person can go 5 consecutive days without signing the notebook, they get 5 pieces of candy. If the whole class can go 5 consecutive days without a problem, the whole class can have a movie party after school. Then move it up to 10 days. Then 20. Then the school year will be over, you’ll have had 3 parties, and 35 solid days of teaching with no interruptions. Remind them of the consequences. Another option to the 5 consecutive days thing that works well with younger kids, would be a jar and marbles. Each day there are no problems, you add a handful of marbles. When it’s full, it’s party time.It could be each time a student goes 5 consecutive days (or one day!!!) without getting trouble, they can put a handful in. It works great with younger kids because they have smaller hands and love the visual element!

Expect crock-pot style results
The class didn’t get out of hand overnight, and it won’t get under control overnight. They will first fight you. Some of the kids will love it. Others will hate it. Ultimately, they will all be proud of the work that they are able to get done as a result of the fixes you implement. Younger kids respond to these kinds of restrictions much better than middle school kids do. Again, hang in there! I don’t think the light at the end of the tunnel is an oncoming train after all!

8 thoughts on “Turning The Ship: The Voyage To Becoming A Great Teacher”