Skip to content
You are here
Home > Blogging & Technology >
356 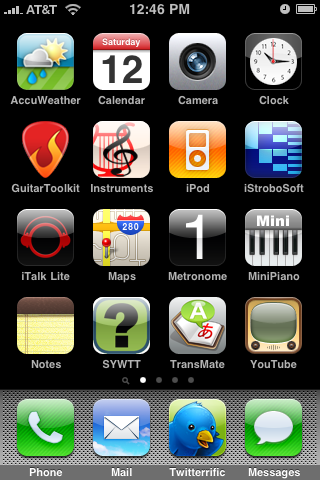 On the day that the iPhone 3G was released, I rushed out to the local AT&T Store to pick up my very own. I was excited, so I rushed home and wrote 10 Awesome iPhone Apps (Band Director Style) and listed all of the cool things that I was going to download and use in class. Well, a year has passed and things have changed somewhat. So I thought I’d go back and look at the list. I was somewhat surprised to see how it has changed and how some of those apps never panned out to be what I thought they would be.

Even so, I am thrilled at the purchase of my iPhone and continue to find it extremely useful in my classroom; but in some unexpected ways. Some of the built in functions are amazing. Some of the free apps are great. I’m going to do a quick walkthrough of 20 of the most interesting things that I have found that I actually do throughout the work day with my iPhone.

Do you own an iPhone? What apps do you find most useful in whatever classes you teach?