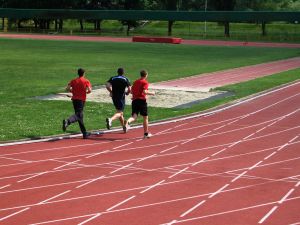 Carol Richtsmeier made me do it. She has pretty much shamed me (guilted me perhaps?) into blogging through my weight loss this year with her. I’m doing it because I want to run a 5K. She’s doing it because she’s tired of dragging along the extra baggage. Well, me too. She’s done all of the legwork and I’ll do some design work when I get a chance, but she’s set up a blog call Can Wii Do It? to track our progress. I suggested there might be others who would be interested in blogging through their journey (either with a Wii or without). If you are, she would probably be the person to contact since she’s doing most of the administrative stuff for it so far. Just hop on over to the blog and shoot her an email and maybe we’ll see if it’s possible to do it. Wow, it’s way past my bedtime. And I have morning duty tomorrow. Good night!