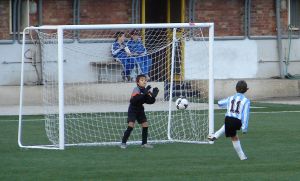 In the past I’ve come up with New Year’s Resolutions, and more recently Visions for the Year. They sort of helped to guide the first four to six weeks of the year, but rarely have lasted much beyond that. This year is different. This year I’m for real. I’ve decided to create a BHAG – a Big, Hairy, Audacious Goal – for myself. I am making active steps in moving forward on the goal, and I am setting myself up to either win big or fail big. It will not be a quiet ending, whichever way things pan out.

But I’m getting ahead of myself. The first thing I’ll do is go over the basics of goal-setting, and then give an example of my current BHAG.

Specific
Most goals tend to come in an open-ended form such as “I want to lose weight” but don’t include any specifics about the goal. What can you do with “I will exercise more and eat less” if you don’t have specific data with which to compare? If I say that I’m going to eat less, I need to know what eating less looks like. Maybe I’ll lower my monthly food budget, or make it a goal to leave food on the plate every time I eat.

Realistic
I may realize that I need to lose over 100 pounds for the Wii Fit guy to say that I’m healthy, but if I set a goal of losing 100 pounds this year, that’s fairly unrealistic. Oh sure it can be done, but it’s atypical, and the chance of me maintaining a weight-loss rate of 8 1/3 pounds a month for an entire year is pretty minimal. Especially given my past track record. But 60 pounds is a bit more reasonable. 5 pounds a month on average means that I can have a wild month where I lose 9 and another in which I lose 1 and still be on track.

Measurable
An effective goal must be measurable. If I set a goal to eat 50 Twinkies, but don’t set a target time for such eating to be done, then there is no clear motivation to get the goal started and finished. If I say I’m going to eat 50 Twinkies in 20 minutes, then I can sit down and figure out that I’ll have to consume 2.5 Twinkies every minute, or one every 24 seconds. This gives me a target rate for accomplishing the goal, and allows me to adjust within the time-frame to figure out if I need to speed up or even if I can slow down the pace a little bit.

Public
A goal that isn’t codified in writing is merely wishful thinking. Write it down. Blog about it. Tell your friends, family, enemies, students, pets, pastor, rabbi, hairstylist, pizza delivery boy, grandmother, whoever you can about it. Tweet about it. Facebook links relating to it. Go public and go big.

How my goal follows this pattern
So this Sunday, the sermon in church was based on Philippians 3:13,14:

So after some deep meditation, I decided that it’s time for me to return to my early college healthy lifestyle. So I have two specific goals that I have set for myself:

These goals are specific, reasonable (albeit clearly they will take intense effort and focus), measurable, and public. I’m telling my running friends about my 5K plans. I’m blogging about it here, as well as on another blog. I’m posting Twitter and Facebook status updates about my workouts and goals.

What about you? What are your goals for the new year?