Skip to content
You are here
Home > Blogging & Technology >
131 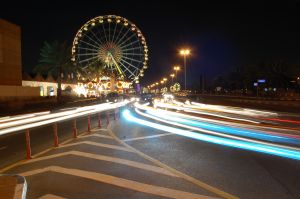 It all started innocently enough. As a band director, I have been to numerous rehearsals of orchestras, jazz bands, mariachis, bands, and even choirs. So when Mr. Teacher (of www.learnmegood.com) asked me if I wanted to join him for choir practice, I was excited.

“Well, I was just watching these 100 Free Online Lectures that Will Make You A Better Teacher. But I have a few minutes to spare. Wait a minute, I didn’t know you could sing!” I responded.

“I doesn’t,” was the puzzling reply.

Thus began the longest day of my life

If I had simply pulled out my handy New Revised Teacher Dictionary, I would have known I was in for way more than I had bargained for.

As we arrived at his apartment, I saw around 15 cars outside. Since this was Day 3 of the challenge, my new buddy Darren was tagging along showing me how to Build A Better Blog, as was my favorite blogging guru Lorelle. I also had my apprentice Jason along for the ride.

“Something isn’t right about all of this,” Mr. Teacher remarked, “Here, I’ll watch your back when you go in.”

We approached the door and heard Nancy Flanagan loudly discussing International Tests of Mystery with whomever was in earshot. Right as Mr. Teacher reached for the door, Liam Goldrick burst out the door shouting, “Bring Out Your Dead!” ala Monty Python and the Holy Grail. Lorelle had to struggle to keep him from burying her.

Jose was sitting on the porch swing complaining about his Not-So-Wise Wisdom Tooth. He was clearly a casualty of the already rowdy practice.

Realizing that there was far more revelry going on than actual rehearsal, I turned to Mr. Teacher and asked, “Do you really think I should have brought Jason with us tonight?” I then decided to take him back to school.

“Aww shucks, I was looking forward to interviewing all of your teacher friends tonight. I guess we’ll have to Let The Games Begin some other time. If you need me, I’ll be at my blog.” Denise immediately pulled out her April Math Calendar and penciled him in.

Immediately after Jason was safely in the car, RayRay stumbled out the door mumbling, “What Is Education? What Is Education?” Clearly, he had been “practicing” long before he arrived at choir. Old Andrew contended that he just was dealing through some Self Esteem issues.

Right behind them stood Nancy again. “As teachers, we hear too much complaining about low pay and long work hours. But I have figured out the secret. Come on over and lemme tell you about A Dozen Ways to Save Dough. A crowd quickly formed. I heard one joker in the back shout something about how teaching is a Part Time Job At Full Pay Wages. When will they ever learn?

I went back to the car and decided that I needed some alone time. On the way to Jason’s school, we discussed The Pros and Cons of Online Classes, Cracking the CLEP, I gave him 4 Tips For Students That Will Set You Up For Life, I even explained that Tech Education Opens Career Doors For Working Adults. Pretty much the standard stuff you would tell a student. I also told him about Shakespeare: How I Became A Fan and explained why some people are Not A Fan Of The Iliad. “It all boils down to this, my young Jedi teacherling,” I said. “Knowledge is the key.”

We soon began discussing Recession 2009 And Its Impact On Teaching and I asked him about his college plans. He seemed concerned about his forthcoming SATs, so I pointed him to The Best Books To Build Your SAT Vocabulary. I even mentioned 50 Awesome Opencourseware Links To Effectively Get Your Photography Degree For Free. He was not impressed. I then advised him that An MBA Degree Pays Off, and was about to tell him that he might even consider staying home and just Don’t Go To College. Just then, my good friend Pat popped up in the back seat and told me, “Don’t forget to teach him to Ask The Right Questions!“

As if taking a cue from Pat, Jason got a call on his cell phone. “Let me put it on speaker.”

Joanne Jacobs was on the other end. “Ya know, Jason, if you’re like most high school students, you will get rejection letters from a handful of the universities. You will probably even engage in some Rejection Tweeting along the way. How’s that for inspiration? But don’t feel left out, my teacher friends. You never know how many Know-nothing experts have been giving you presentations either. Besides, I am hosting the carnival next week, so I just wanted to remind everyone to submit their entries by clicking here.”

“How do you click on a phone call?” I questioned. “I always figured that about the experts! Now to change the subject, what are you doing back there, Pat? Have you been there this whole time?”

“Oh, don’t mind me, my girl Kim just asked me to do a book review for her about this: Beers, Ale, and Free Cocktails book.”

“Umm, shouldn’t that be bees instead of beers? I think you got the whole thing wrong, in fact. I believe it says:  Bees, Snails, and Peacock Tails: Patterns and Shapes…Naturally. I think we know where your mind is!”

“Enough about that! You just reminded me that I’ve got to catch up on reading these 20+ Must-Read Education Technology Blogs, and then after that, I have to read these 20 Blogs I Wish Were Around When I Started Teaching before my next safety meeting. But it’s so tough staying focused when I have these Top 100 Tools For The Twittering Teacher at my fingertips.”

“Of course! I just finished another Book Review: 411 SAT Prep Series.” She tossed a copy to Jason.

“If you write those reviews and other people steal them, that’s content theft! Here’s a handy dandy guide of What Do You Do When Someone Steals Your Content.”

Just then, my iPhone rang. It was Ryan. “Joel! Where have you been? We’ve been trying to reach you for hours.”

“I’ve had my phone with me the whole time. No ringo. I think you’re trying to make me feel bad. Besides, I’m on my way to a team building event.”

“Understood, but we need you here pronto. Get back on the double. You better arrive post haste and return to the office toot sweets.”

“What does that even mean?”

He didn’t answer, but instead continued DJing for what seemed like an hour. I handed the phone to the back seat. Expecting Pat to grab it, I was shocked to see Marcy Webb in the back seat also. Noticing the shocked look on my face, she simply said, “Don’t Take It Personal!“

It really was time to get Jason back to school.

“Do you mean hegemony?”

“No, that would be the leadership or predominant influence exercised by one nation over others. I don’t know what I mean, but the Union President’s Dilemma is freaking me out. Have you heard about The UFT’s New Directive: ‘Amputate.'”

“Jason, you better go now. But please watch out for these 23 Warning Signs of Scholarship Scams.”

Just then Erin King, the school counselor passed by and handed us all printouts of her article, What Do General Education Teachers Need To Know About Special Education. Jay P. Green followed close behind telling us that John Rawls Is Twisting In His Grave.

“Let’s stay focused,” said Ryan. “What do we do about the problem?”

“Training,” commented Kim. He seemed satisfied with the response. He then went to his office with Mathew Needleman to discuss Technology Purchase Priorities.

It turned out that April was there recruiting kids to her college. As she approached, she turned and yelled, “Stanley Tate says, ‘Don’t Raise Tuition. Raise Hell!‘”

Darren, Pat, Marcy, and Lorelle all turned to me and we simultaneously chimed in “RANDOM.”

Realizing that Mr. Teacher had been left unguarded at his apartment, we decided to get back over there. Besides, we could see that Darren #2 (of Right On The Left Coast) had reached maximum kiddage in his classroom. Pat couldn’t help but laugh. You see, we had all recently collaborated to nominate him for Teacher of the Year just to see him struggle through the arduous application.

When we returned to the car, Clix was sitting on the hood wearing a halter top, fishnet hose, a miniskirt, and sporting a nose ring to boot. “It doesn’t matter How We Dress: Classy Or Classist, as long as the students are Finding The Voices!”

Suddenly, everyone’s favorite SOB (What is an SOB?), Liz Strauss the Sucessful and Outstanding Blogger herself, showed up and asked “Do Leaders Wear Jeans? Does What You Wear Show Who You Are?“

As if to prove that point (or disprove it as the case may be), one of the repeat customers walked by and whistled, “Looking good Mrs! C. Looking REAL good.”

She then proceeded to beat the living snot out of him. “Why on earth are you 14-years old and still in 2nd grade? It must be why they call you a milk carton photo in the attendance office.”

Ryan came out of the building and handed Clix her Detention Slip. It said simply: Progress Report: WTF is up with hitting students? “I need to see you in my office.”

We used the diversion as our opportunity to make our getaway. Before we could go, Darren saw one of those annoying flyers on the windshield. This one read: The Best Earth Day Sites by Larry Ferlazzo. “Where does he find time to post on his blog as frequently as he does and still place those in the teacher parking lot?” mused Lorelle.

Before anyone could figure out the answer, I gunned the gas pedal and we were back at Mr. Teacher’s apartment in no time. As we got there, it looked like the choir practice was winding down. Nancy came out beaming. “Well, we had a successful practice today!”

“Classroom Management, Getting Ones at UIL Sight Reading! Do You Run The Risk of Being Successful?” I asked. “If not, check out these Tools For Success.”

“I can tell you about success” added Liz.

“Wow,” said Mr. Teacher, “this choir practice is too much Irony for me. I’ve got to get out of here. Besides, I think it’s just about time to do some gardening with Grandma.”

As Mr. T ran off into the sunset, Darren shouted, “Don’t forget to sign up for 31 Days To Build A Better Blog!”