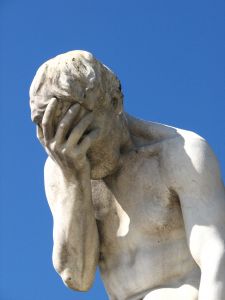 Last week, Michelle wrote that she learned that one of her colleagues recently passed away. She writes a popular blog on blogging and was wondering if she should take some time away or just how to handle her desires to grow as a writer, generate income with the blog, and also just get a chance to deal with the emotional heaviness of the situation.

Last November, I went to the first funeral of a former student of mine. She was a high school tuba player in the two years that I knew her. She graduated in 2004. She lived down the street from me. She washed my car for a quarter once. We traded movies during the summer, and we established a caring friendship. She was 21 years old. She was the designated driver at a party one night in November. She dropped off her last friend, was heading home, and was broadsided by a drunk driver who ran the red light.

She was in the hospital for a few days. It tore me up inside as I made and received phone calls from parents and former students about the entire situation. Her brother posted updates on her condition regularly on the comments on her MySpace. After about a week of being unconscious in the hospital, she finally lost the battle. Her funeral was scheduled for the day before Thanksgiving.

What did I do? I took a half day off on Tuesday, drove 7 hours to visit my parents, spent the night, and went to the funeral. It was so desperately hard for me to go, but I just sat there in the back. I saw kids I taught who are now adults. I saw parents. I surprised a lot of the kids, and they said stuff like “you were her favorite teacher,” “she loved you,” and “she would be happy you made it.” Her family appreciated me being there as well.

The funeral was beautiful.

So how did this affect my classroom? Fortunately I had another band director there to help me as I took phone calls as soon as they came in. If I didn’t have someone else, I would have taken the calls in class anyway. Why? Because it shows the students that I care.

There are times when the routines of life are simply not that important. Life gets in the way. And that’s just fine! If it didn’t get in the way, there might be something wrong!

Michelle, hang in there. Do what you know how to do, but also remember that the students need to know you are a human being and that you have feelings. And that you CARE. I’ve heard it said a number of times, “They won’t care what you know until they know that you care.“

Love the kids. Love the staff. Be there for anyone who needs you. It is going to be a surreal beginning to the school year, I’m sure. Hang in there and learn as much as you can in the process.