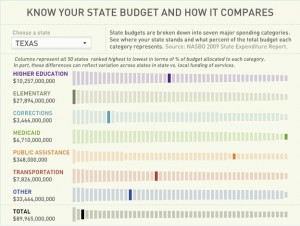 The good news: Texas is ranked #1 in the country as far as education spending goes.

The bad news: Many school districts are on the brink of cutting numerous jobs to keep their budgets in line.
* Additional bad news: Texas is #50 as far as Medicaid spending goes.

The worse news: Not all of you are fortunate enough to live in Texas.

I see news articles posted on Facebook every week about the impending job cuts that are in the plans for next year in the Dallas and San Antonio areas. I’m sure this is a pretty universal thing this year. I know the budget shortfalls have been a big problem in recent years, but I guess I have been more or less insulated by the fact that I live in Texas and my school district is one of the fortunate few that saw this problem from a long way off and has been preparing.

So when I saw that Bill Gates had recently spoken on this topic, I was interested to see what he said. And it was great. In a lot of ways, it’s along the same lines as the Planet Money Podcast I wrote about earlier this week (The Value of a Great Teacher). Watch the video below. In the course of the video, he mentions his State Budgets Website.