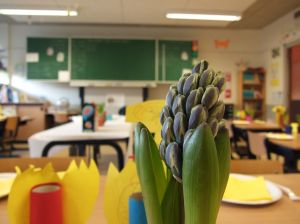 I realized something this week. As I start my sixth year of teaching, I finally have an amazing level of confidence when going into ANY group of students and knowing that I will be able to get them to be quiet and follow whatever directions I give them. I have been absolutely thrilled with my classes this week. So I thought that I would describe what goes on and see if maybe I can shed some light on WHY those things happen.

Someone will be in control

When my dad was getting his degree in education a few years ago, he passed along a story to me about one of his college classes. In the discussion, he said something that I knew, but hadn’t known how to articulate. He said that in every group of people, someone will be in control. As a teacher, it is your job to ensure that it is not some 15-year old kid. We are the adults, we must act like adults.

Acting like adults
Adults formulate a plan and stick to it. Children do what feels good. Maturity is the ability to hold back when you want to do something that will not benefit you. I see too many teachers (and occasionally find myself falling prey to it as well) who simply yell when children are misbehaving. Or trying to ask them why they are making so much noise. A better option that I use frequently when the difficulty arises, is to say “it’s too loud.” I’m not accusing anyone of talking. I’m not saying, “shut up.” I am simply stating a fact that is obvious to any observer. What does that do? That forces the students who are on task to help get the others quiet. Additionally, it allows me to maintain control. Self-control and classroom control.

Control in a classroom setting is vital to your success as a teacher.

The result?
My classes are almost painfully quiet at times. It is such a cool feeling to know that when I need them to be quiet, I can get them quiet. It also tells me that they are going to waste a whole lot less time this year than they might in previous years. I know that they will liven up over the next few weeks, but this control that I have established early will pay HUGE dividends as we get further along in the year.

Here’s a fun thing that happened today. I teach the second band at the middle school. The director of the top group told his classes today that, “the second band is behaving better than you do!” I know there are a handful of reasons for why my classes generally act better than his do, but it still makes me think that I just might have begun to really figure out how to do this teaching thing.

His classes are right after lunch. Mine are the first two periods of the day and the last period of the day. Also, I have discovered that the peer pressure thing is huge. If nobody else is talking, middle schools kids will generally just follow that everyone else is doing.

So how do I do it?
One of the first things that I changed a few years ago was that I do not respond to questions that students ask me while I am busy doing something else. If they are persistent, I will say something along the lines of, “we’ll have time for questions later,” or “please don’t interrupt me; I’m busy working.” This allows me to maintain control of the class, as well as keeping me focused on whatever else I am doing. It also helps to train them to not talk out of turn.

Another thing that I do is to reinforce good behaviors. “Thank you for sitting in ready position.” “Thank you so much for staying quiet.” Here’s the key: I do this even when some students are not on task. It almost serves for them as a preinforcement of the behavior that they are about to be doing. Invariably, others will refocus when I say that.

As you noticed with the quotes above, I maintain a very polite tone with the students. I refer to them as ladies and gentlemen, I say please, I say thank you. In part, it is to reinforce and model good manners. Another key is that it helps to build the respect they have for me. If I go around criticizing them all the time, they won’t work well for me. If I am polite, they will work much better for me.

Tomorrow, we’ll look at some of the major personality changes that I am going to see happen in me over the next few weeks. Stay tuned…