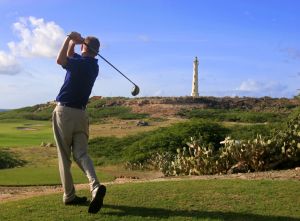 This summer, I began playing golf. I’ve actually wanted to learn for a while now as I have a handful of friends who enjoy the game. Over the last few years, I have expressed that interest to some of my friends. Last spring, one of my friends saw me at church and told me to come out to his truck. When I got there, he handed me ten golf clubs.

So last summer, I went to a couple of driving ranges a few times and learned from some of the good golfers in my life. One of these men in particular has really been helpful. It’s great that he also happens to be the best golfer I know, and I taught his step-daughter how to play clarinet a few years ago. So over the past year or so, I have gone over to his house a few times and let him give me mini-lessons. He also gave me a few boxes of golfballs and has really been helpful in encouraging me to learn more about the game.

Through the school year, I didn’t play or go to the driving range any. I just sort of left the clubs sitting there. A few months ago, one of my friends began working at the local country club and he told me that we could go out and play for free. My interest was once again piqued.

So I went out and bought a bag for my clubs. After the first time I played, I realized that as a beginner I needed to have more than a few golf balls (especially at the country club here, which has a lot of trees and water hazards). So the next week, I went out and bought some more balls. The first time we went, I learned that they don’t let me go wearing just anything I want. “Proper golf attire” is expected when you play. So I had to go the first time in khaki pants. This is not the optimal outfit to be wearing in south Texas in the middle of the summer.

Without going through the whole story, suffice it to say that as I played more, I realized that there were things I didn’t even know that I needed. Now I want a good driver, a nice towel, new grips on my clubs, a lot more water (ha), etc.

In much the same way, when we start out teaching, we know whatever they taught us in college, but that’s about it. We think we know everything we need to know. Then we go to our first interview. From there on out, we realize that there are a great deal of things that we simply don’t know. A lot of them are things we don’t even know that we don’t know. I never learned how to do a fundraising request when I was in college, but had to figure that out in the first month of my career.

I have had some really helpful office staff members, special education teachers, ISS teachers, classroom teachers, choir directors, band directors, coaches, counselors, and administrators who walked me through pretty much step-by-step to making sure I got a lot of the paperwork done that I needed as well as a handful of other things that we do on a regular and irregular basis. Look for these people!

Additionally when we begin, we have this excitement that is almost contagious. People who have been teaching for longer feed off of that energy, and so it’s fun for them. As we teach alongside them, we begin to realize how much skill we lack. It can get discouraging.

For instance, I went out and played 9 holes on Thursday and scored a 93. On 9 holes. Do the math, it’s not good. I went to a different course on Friday and scored 76 on 9 holes. It’s better, but it’s still a good bit over 8 strokes per hole. My friend scored a little over half of what I did. That kind of thing can get frustrating.

But I know that as I continue working on the basics (driving the ball, hitting it straight, keeping my head down, and improving putting), things will improve. There is hope. Similarly, as my teaching progresses, things that were once impossible have now become second-nature. Hope is an incredible thing.

Patience comes with time. The whole process can be much, much simpler as we do it more. Before I started student teaching, the idea of going into a classroom full of kids who didn’t know me was almost petrifying. Now, I can get in front of a group of hundreds of children and know that I can get them quiet without even saying a word. The key is to practice and practice and practice these basics until they become easy.

The same things that apply in my musical performance ability also apply to golf, teaching, pronouncing Spanish names, and any other skill that doesn’t come naturally.

Another cool thing that happens as we spend time learning about golf (or any other hobby that you have) is that it keeps you from dwelling too much on teaching. If you don’t have a wide variety of interests, it can make life terribly boring.

Oh yeah, it also gets me out of the house more!

3 thoughts on “Golf And The Art of Teaching”