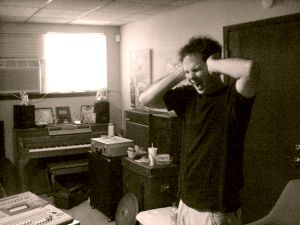 Here is a brief summary of the last 19 months of my life.

In December of 2007, I was getting ready for work one Friday morning. I got a phone call from one of the high school assistant band directors. He told me that the other middle school director I work with had a stroke and was at the hospital. This was a huge blow to the band program as he has been in the district longer than I’ve been alive. It also made for a difficult month for me that included taking two bands to the Christmas Parade the next day, taking each band to four elementary concerts on consecutive days the next week, and preparing both bands for their Christmas concerts the following week. Each performance included different music, by the way.

Throughout his recovery over next few months, I remained in constant contact with him as I prepared students from the two bands for all region and the UIL Concert & Sight Reading contest. I picked out music for both bands to play at UIL, and spent a whole lot of physical and mental energy on the kids and getting them ready to sound great.
He finally returned right before spring break in March of 2008. Both bands were able to go to UIL and perform at a high level such that we returned from UIL with Sweepstakes trophies for both bands.

Right when we finished with UIL, I began playing trumpet in a mariachi group that he runs outside of the school. Many of the members of the group are in high school and some of them have graduated. This was a wonderful opportunity for me as I haven’t had any real musical outlet outside of school since I started teaching. I play keyboard in church, but it’s not too terribly involved. Mariachi is.

One of the really cool things about me playing in mariachi are that it exposes me to the Mexican culture in a way that simply living on the border alone does not. I have also picked up some more Spanish in the last 15 months of playing with the group.

The reason I initially started playing was because I realized that it would give me more things to do, and that is a pretty big difficulty being 7+ hours away from family and most of your friends. In fact, one of the challenges that some of my friends and I still struggle with here is how to meet more people our age. It’s tough once you get out of school. So I started playing in the mariachi. It pretty much filled up my entire summer as we were getting gigs every week, and having practices two or three times a week as well as some trumpet sectionals.

When summer band started up at the end of July, my schedule began to get much busier. On top of the normal marching band duties, I also had mariachi in pretty much the rest of my free time. Somehow I managed.
We made it through the football season — even went to a playoff game. And then when I would normally have some down time, we started picking up more weekend gigs.

I compensated by spending less time in the afternoons at work.

The downside of this decision was that I had a lot of stuff that simply didn’t get done. I would get home and check blog stats or whatever, but not do a whole lot of cleaning up around the house, and really didn’t do much blogging worth much either. No worries, we had a three-day weekend coming up just around the corner. Somehow this three-day weekends always flew by and the junk just seemed to accumulate.

The school year drug on. I enjoyed being at work a lot, but I didn’t seem to have much motivation when I wasn’t at work. It was awfully depressing to think about. On top of that, many of my friends had stopped asking me to hang out because the answer had typically be no because of mariachi.

So when this summer came around, I decided it was time to change things. I had seriously considered the idea of moving back closer to home, but then I realized that I would just be running away from my problems instead of confronting them. There seemed to be a deeper issue at work here that needed to be addressed.

I decided to take the opportunity in late May when my sister was visiting our parents to go up there. My cousin also had a graduation party that weekend. I missed school the following Monday, but I really enjoyed the chance to go up there and visit with them all. Sometimes you just need to miss a day of work.

I also missed a mariachi gig and went up there once in June. It was great being able to go to my old church up there, see a lot of my friends, and spend time with my family again. Unfortunately, the Rangers were out of town the whole time. Boo.

But this summer has afforded me some good solid thinking time.

Over the last few weeks, I have made a handful of decisions that I am anticipating will prove highly beneficial to me personally in the upcoming months. I have also spent some time going through this blog and have come to some kind of disheartening discoveries on that front as well. In no particular order, these are observations that I have made about my life, my blog, and just stuff lately.

So the time has now arrived for me to reclaim my focus. Mariachi is leaving, a whole lot more attention-intensive things will either decrease or increase in my life, depending on how important they are to me. I love being a teacher and having some space in the summer, because it gives me a whole bunch of undistracted time when I can really refocus on the things that are most important. Hopefully you do these same kinds of things from time to time as well.

If not, now is a good time to set aside some time and evaluate your allocation of attention.

7 Comments on The Allocation Of Attention