Think back 5 years. March 2004. It feels like an eternity ago! For me, that was when I really hit the wall. That was when my head director told me that my contract would not be renewed. I resigned in lieu of nonrenewal. I spent the remainder of the semester learning like crazy. In fact, that is the experience that eventually formed the inspiration to begin this blog (read more here). But that’s really not the point of this email, the thought just struck me and I realized how quickly time passes and how much I’ve grown since then.

5 years ago, there was no MySpace (until August 2003), no Twitter, no Facebook. Nada. Blogs were beginning to take off slowly. Blogger came on the scene in 1999. WordPress debuted in 2003. That being said, looking at the landscape of the Internet today compared to 5 years ago, it is a completely different place. Back then, people used emails a lot. Text messaging was hardly a way of life for most. RSS readers were uncommon, and sketchy at best. 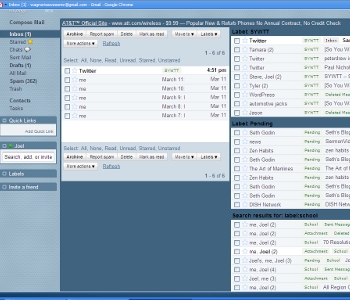 Does the ease of accesibility and availability such a wide range of information ever just boggle your mind? Does it frustrate you at times? I know for me, it can be a huge problem if I let it get the best of me.

These are some steps I have taken to reduce the information flow while still maintaining a bit of a touch on the pulse of the world.

2 Comments on Information Overloaded? 10 Quick Tips To Tame The Tide