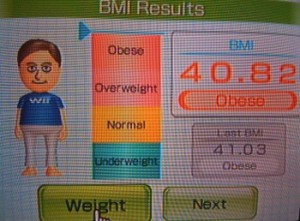 The picture speaks for itself. It’s the new year, it’s time for a change. My little Wii guy isn’t going to look like this much longer. He’s going to get closer to a healthy weight. Wii Fit tells me that a healthy weight for me would be around 140 pounds. That’s more than 100 pounds away. But a weight of 10 pounds less than now is a healthier weight than whatever he currently weighs.

I have a friend who has lost over 20 pounds in about two months. I asked him about it, and he tells me he is severely limiting how much he eats and exercising a lot. But over the holidays, he continued exercising and ate like normal and still continued losing weight, but obviously as a slower rate.

Inactive lifestyle
But the weight isn’t the problem as much as it is a symptom of other problems. The problem is that I lead a sedentary lifestyle. That and I eat like a racehorse. Put those two things together and you get pretty dismal results.

How it all began
If you remember back in August, I discovered that I had pretty high blood pressure. I went to the doctor, got it checked, and have been on Micardis for a few months now, and it has pretty much solved that problem. Additionally, my cholesterol levels were elevated as well, so I got some medicine for that.

Even before all this, I noticed my asthma beginning to give me trouble much more than it has in recent years. I developed a respiratory infection in September that has lasted on and off since then. Methylprednisolone did a great job for a while, but it came back about 6 weeks later and I got on a regimen of Cipro that ended on Christmas Eve.

After talking with my family over the break, I’ve come to believe that I’m suffering from some pretty intense allergies (to dust, mold, and possibly some sort of food allergies). I got my blood drawn about three weeks ago to test for food allergies and now that I’m back in town, I’ll call the doctor tomorrow to figure out what they found from that. All that background really simply to say this:

My band doesn’t read rhythms nearly as well as the ones I’ve taught in the past, some administrative changes have been happening throughout the year, and my health has been suffering. Needless to say, this has been a difficult semester for me!

Where it’s all going
So we’ve come now to January 2010. I typically don’t do New Year’s Resolutions in the traditional sense. Usually, I simply come up with an outline of where I believe God is leading me to focus throughout the year. This year has felt different now for a while, and for good reason. I’m sick and tired of being beaten up by my health. It’s time for me to take control of it. Here’s where the little Wii guy comes into the story…

Where the Wii guy comes in
I have been considering getting a Wii for the last few years since my little brother got one. The price has always been the thing that stood in my way. Then Nintendo lowered the price in October, and I ordered one almost immediately. I ordered it through Amazon and chose the option to get free shipping so it took a while. It finally arrived the Friday before Thanksgiving break. I didn’t even have time to take it out of the package after school because I went out of town for the weekend. I finally was able to get it set up later in the week and began my Wii Fit adventure. I haven’t worked out regularly on there, but I have usually done 3-4 days a week. Then Christmas break happened and I was out of town for a week and the last week has been tough getting back into the routine. But no longer. I got some inspiration over at the Wii Fat Marathon blog this afternoon.

Running
I have quite a few friends who either run regularly or have run in marathons or half marathons over the past few years. I have other friends who do a lot of cycling and just basically get out of the house and do stuff. With all of the allergies that I’m experiencing, maybe getting out and moving is one of the best things I could possibly do. Plus, it gives me goals and motivation. So I’ve talked with a friend and am now making plans to run in a 5K in April. I’m excited. That Wii guy is also pumped, you can even see his little grin!

I have 14 weeks until the 5K, but I’m starting this 12-week training program today, if you’re interested in joining me…also, read more info here: How to Run Your First 5K