Skip to content
You are here
Home > Blogging & Technology >
1 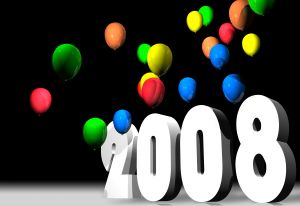 2008 was the first full calendar year that I ran this blog. It saw its ups and downs, and in some senses, it was a sort of anticlimactic year as far as my personal blogging habits went. Nevertheless, So You Want To Teach? continued to flourish.

January began with my hosting the Carnival of Education. That was also the kickoff of my new WordPress theme, which I had personally designed and kept playing with throughout the year. To this date, I still have not seen a blog theme even remotely similar to it. But I will be putting the SYWTT 2008 theme to rest sometime next week. More info on that later.

As I mentioned in the last article, the other band director at my school had a stroke in December of 2007. Through the course of those three months, I was presented an intense workload. I was responsible for 8 classes in 7 periods.  The two simultaneous percussion classes led to some problems, an apology, and a resolution. It also led me to some amazing soul searching and reflection. I also decided to slow things down in my life, as well as create some whitespace.

I also discovered 8 Ways Blogging Makes Me A Better Teacher. I think that might possibly be one of the most underrated articles on this site. I have since discovered that blogging can take over your life if you’re not careful and allow it to do so. For this reason, I have stepped way back from this blog and am really trying to stay focused on my job as well as my spiritual life. More about that in the forthcoming summary of the first two months of 2009.

As the blog grew, I began to focus more and more on numbers. I had 150 subscribers in January and really spent a lot of time looking at stats and trying to force growth. I added some advertisements later in the year, I did all sorts of things that I now regret. I tried to turn it into a sort of secret marketing ploy to raise money and make myself feel better about myself. I had to step back and realize that growth happens not by begging people to share the information, but simply by continuing to do those things that made the blog useful in the past.

As I look at the articles from 2008, I notice that very few useful pieces of information come out after April that would actually apply in the real world teaching environment. My focus became building blogs, flagrant self-promotion, and really just pretty much seeps with pride and greed. I am actually ashamed of a lot of what happened in 2008 and wish I could take much of it back.

A few decent articles that actually found their way onto the site include:

Comments and reader-generated content
All in all, some of the coolest content on the site last year was produced by the readers, either through guest articles (Are Classroom Rules Needed? quickly became one of the most popular articles on the site), or more often through comments. If you read the blog through email or RSS only, you are likely missing out on most of the good stuff!

Music Education
In January I stumbled across Joseph Pisano’s blog and his goal of getting 100 Music Education Bloggers connected by the end of the year. I thought it was a cool idea, but didn’t know if it could be done. Even so, I jumped on board and tried to help promote the project from time to time. I contacted him early in the spring about the idea of putting together a Music Education Blog Carnival and he was interested, but neither of us really knew how to get started working on it. We discussed it for a few months and decided to run it once a month. The first edition of the carnival finally came out in July on SYWTT and I really am excited to see it continuing to grow, mostly as a result of the tireless work of Joseph who keeps it running smoothly.

All in all, it was a pretty good year, but a lot of projects fell through or were overshadowed by my misplaced focus. In some ways, 2008 was a disappointing year for me personally. As we move on into the third year of So You Want To Teach? things will hopefully smooth out and I will get focused back on that initially made the blog useful.